Last night, as Mark and I lain next to each other, he asked,

“Do you wish you still lived in Houston? You seem like you had so much fun there.”

After yesterday’s poem to my hometown, you may be wondering the same. Quite simply, the answer is no.

Boy, do I. But given the opportunity to move back today, I wouldn’t.

Yes, it’s hard living so far from where I grew up, where people who love me live. And not just my friends and family. Do you realize what it was like to have strangers come up to me and tell me that they heard my laugh from across the room and that it brightened their night? To strike up a conversation with another stranger and immediately dive into the depths of who we are and our fears, hopes, desires until the bar shut down? In Texas, I remembered what it felt like to belong.

I realize that when people ask me what I miss about Texas, and I say “only the people,” it isn’t specific people, like my mom and my best girlfriend. It’s the hearty laughter and humility of the people as a whole. That southern sun must do more than create beads of sweat on our foreheads; people share the warmth in their hearts readily.

Oh, and the food. I filled up on all my favorites: taquitos, crawfish, donuts (quite possibly the best simple glazed on earth), more breakfast tacos than a non-Texan will ever understand, and my favorite–Indian pizza with Tandori Chicken. I die.

I wouldn’t choose to go back to live in the comfort zone, where they make all my comfort foods, and where southern hospitality is sure to make just about anyone feel right at home, because that’s not what I need right now. Yesterday marks seventeen months since we moved to New England, and the amount of growth I’ve labored through is unreal.

I went through stages of deep loneliness, a depression that was thick and heavy. I learned a lot about myself. About how I push others away. How, as someone with a cheerful disposition, I don’t feel lovable when I am not in the mood to entertain those around me.

I had less to fill my time. Less social obligations, and with debilitating social anxiety, significantly less errands I was willing to run. Opting for delivery services instead, even for groceries. I escaped the monotony of everyday chores with solitude away from home, hiking in the forest. Earlier in the year, I vented to this blog about my progress, before shoving it in the drafts folder. It said this: 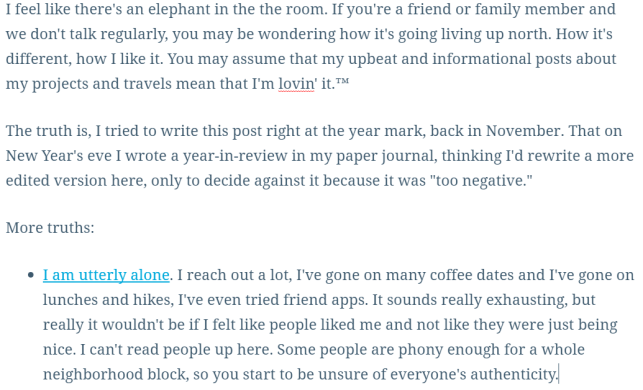 Of course, it didn’t entertain, even if it linked to a nostalgic video. It wasn’t cheerful, so I left it behind. It was accusatory of the people I had met. Seemingly damning of a culture I still wanted to fit into. So, I hid it.

Once I let my guard down and stopped hiding who I was, I stopped feeling “utterly alone.”

I reached out to people I had met before, even though I hadn’t been sure if they liked me, and I shared myself. The uglier parts and all. It was freeing and connecting, because once you get vulnerable, you invite others to do the same.

The culture is very different. People are nice, but not as friendly, often cold. It’s hard to read. There’s cattiness within groups of moms at my son’s school that was so unfamiliar to me. After meeting a group of them and one, recognizing my name as the mom who made Cinco de Mayo cookies, said:

“OH! My Gosh. Those were SO GOOD! I saw those and I told Sharon that we just had to find out whoever made those, because they obviously have so much time on their hands! We have so much work that needs to be done with the PTA!”

At the time, I was so broken and lost and ashamed and vulnerable. You know what I think now?

I realized most of why I thought people disliked me was incidental or overthinking little interactions, and as I isolated myself, I was becoming more awkward. Also, I was still in a position of not liking who I was becoming. I had moved away and begun to feel uncomfortable in my own skin, unsure of the parts of me that I wanted to keep or tuck away.

Yeah, there’s phony people. We’re in the land of keeping up with the Joneses and Stepford Wives, whether I like it or not. But I’ve also met some really, really amazing people. Once I started being more honest with myself, I learned it was a great way to filter out the people whose values don’t mesh with mine.

This time with increased solitude has been the greatest blessing. I’ve gone from a frantic, overstretched mother in Texas to a person who is more calm and productive, organized and artistic. I’m on a journey, playing the long game and committing myself to my values rather than over-committing myself in general.

I have space to write my book and learn new ways of expressing my creativity. I ain’t mad. And the space is gorgeous: experiencing every season is something I never knew I was missing out on, I live a mile away from the beach, there’s wildlife in my literal backyard, and the forest is down the street, yet I’m just a train ride away from New York City and Boston.

Will I ever move back?

Who knows? Will I stay in Connecticut for the rest of my life? Likely not. Native Americans once would settle somewhere, until the resources dried up, then move on to a new settlement. I think we’ll do the same, but instead of picking all of the berries and hunting all of the bison before moving on, we’ll be exploring culture, sights and history of a place before seeing what lies ahead.

I don’t miss the weather in Houston, and I’m sure if we move from here in the future, there will be some choice things that I won’t miss about this idyllic town. But, I do love it here.

And it’s exactly where I’m supposed to be.

4 thoughts on “A cross-country move, a year + later”