Not only has it been weeks since I published My Stay in Seattle: Day 1, but I’ve also already traveled to the opposite side of the country since then. I’ve got some catching up to do.

I had time to burn before the appointment I had made for glass blowing classes in Seattle. I headed toward downtown to see what I’d find to pass the time, with intentions to stop by the often-hyped Pike Place Market.  I found an outrageously priced parking lot, and lo’ and behold!

I could live here.

Prior to my arrival, I couldn’t understand what the hype was about. I saw photos of the market, and it just seemed to be a hipster/tourist laden farmer’s market like any other. Boy, was I wrong. This is really what travel is all about. You can search and see images of wherever you may go, you can Google map just about anyplace and see panoramic views, but there’s nothing in the world that can mimic the reality of sights, smells, sounds, textures, temperatures and tastes of seeing something firsthand.

Pike Place was one of those rare places that stimulate all of your senses at once. The flowers were so fresh and fragrant, tourists and locals alike could be seen carrying a fresh bouquet blocks away. Booth by booth, be it a local artisan, a fresher-than-you’ve-ever-had fish stand, a local produce salesman, or a bakery that’s been in business for over a hundred years, there was something to satisfy all of your cravings. I bought a bag of Washington cherries and they were the juiciest, most luscious fruit I had ever had. They were so flavorful, it was as if all of the other fruits I have had before were only aspiring to be similar to these. 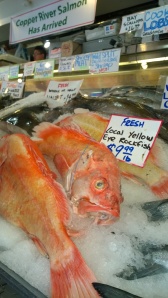 While I was at Pike Place, I ran into this guy :

ignore the dumb look on my face, shared selfies aren’t my forte.

Which I thought was pretty hilarious. After the conversations the night before, I was curious. I handed him a dollar and asked him a bit about marijuana sales. He’s a card holder and said  that dispensaries can be found by looking for green cross symbols, but “It’s much easier to just Google it.” Though I’m not involved in that stuff at all anymore, I grew up labeled as a “stoner” and decriminalization blows my mind–I never thought I’d see the day. It was about time for my glass blowing class to begin, so I headed that way.

This entry was longer than I was comfortable with, so I made a separate entry all about my experience blowing glass.

After class, I headed to the nearby neighborhood of Freemont, where I had a cup of Seattle coffee while eating a late lunch. It was a cool little neighborhood, with lots of niche cafes, graffiti, commissioned artwork and antique shops. It was similar to Houston’s Montrose, except add in a chocolate factory, a walking trail with gorgeous views of Lake Union, and well, the Freemont Troll. In other words: better.

I’ve had a lot of sushi in my life. I’ve been to the higher end sushi restaurants that Houston has to offer, and various highly esteemed places in Salt Lake City, Minneapolis, San Diego, etc, but unless I find myself in Japan sometime soon, I don’t think I’ll be able to  match the sashimi at Shiro’s that we had for dinner that night. The fresh slices of fish melted in your mouth like butter, full of flavor that was anything but fishy. The line wrapped around the building before opening, but because we had six people in our party, we were able to get a table with reassurance to the staff that we’d be out by seven o’clock, when they had a reservation. Next time we’ll reserve a spot…maybe for every night we’re in town. It’s that good.

It was suggested by a local that the six of us head over to Edgewater Hotel for a drink. I was driving, so everyone but me was getting shnockered. The place was GORGEOUS. Again, the conversation of marijuana legalization popped up (I’m assuming this is happening all the time in Colorado and Washington State nowadays.) We found out that there are websites for dispensaries that deliver. After some back and forth and hesitation, we decided to see what it was all about. For research purposes, of course.

The Marijuana delivery website was very well executed and thorough. Each strand had a photograph and a description of what the results would be if ingested. We gave them a call, and they took down our name and phone number and said they’d call us back. About forty-five minutes later, we received a call, and someone was heading out way. They hadn’t even taken our order!

A guy in a blue shirt with an oversized backpack bet us in the hotel lobby, and he offered to either sell the product to us in our room or in the lobby. We weren’t staying there, so we had a seat in the lobby, five feet from the front door, and he proceeded to unload his  backpack of tupperware. He asked us if we had a strand in mind. We told him we were thinking about the White Elephant or something of that nature, and he smiled. “Great choice. That’s one of my favorites, I love indicas.”

He sold us a pipe as well, and though we were excited about the process of buying, we weren’t as interested in actually smoking the marijuana. EVERYONE wanted to go to sleep. Immediately. We’re apparently tinkering on the edge of dinosaur-dom, and they had all been drinking all night.

Not me. Remember that coffee I had in the afternoon? Well, I laid down to sleep and concluded that yes, it may be legal to buy marijuana here, but it is still in some way unethical, and everyone we had talked to about it was judging our choice to do so. I had thoughts like this, along with many other completely paranoid, unrealistic conclusions about every other bad choice I’ve made in my life, until the wee hours of the night, tossing and turning for an ungodly amount of time.

…If you couldn’t tell, I don’t drink caffeine often. For good reason.

One thought on “Blown: My Stay in Seattle, Day 2”