This was the second time I’d been to Collis P. Huntington State Park. Last time was while I was training for my trip to Machu Picchu (That I still haven’t written about!) and I got the most lost I’ve ever been on a trail. Laser and I were out for hours. No complaints from that guy. END_OF_DOCUMENT_TOKEN_TO_BE_REPLACED

Last Sunday, on the first weekend after the Autumnal Equinox, we headed out to Silverman’s Farm. (Along with what seemed to be everyone else for miles.) No doubt, this is the perfect place to head to on a date or with a family when you get that first hint of fall weather. END_OF_DOCUMENT_TOKEN_TO_BE_REPLACED

It’s been far too long, but I’ve finally got a bit of free time and no trips planned for a whole month. Back to June. Back to The Philippines. Back to diving. 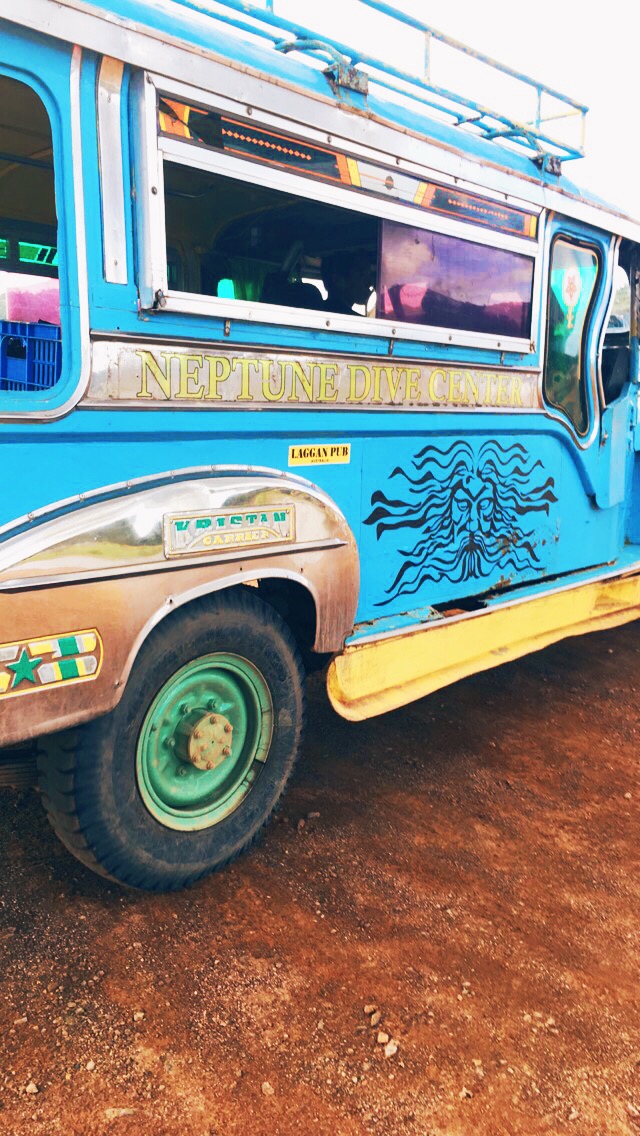 The Philippines is known worldwide for its diving. From the UNESCO World Heritage Site, Tubbataha Reef National Marine Park to the biodiversity of Puerto Galera, its a diver’s heaven. Though I’ll never tire of swimming alongside colorful marine life and spotting exotic animals, there’s something a bit more thrilling about doing so in a shipwreck. And Coron Bay has many to choose from.

A little bit of History

On September 23, 1944, Combat Air Control reported enemy activity in the area. The aircraft carriers USS Lexington, USS Intrepid, and USS Cabot ordered 24 bombers and 96 fighters to cover a chart distance of 350 miles on the following day. What happened next became one of the longest bombing missions in the history of U.S. naval aviation: a three hour flight before the attack that led to the ten shipwrecks.

For a thorough history of how the wrecks came to be, head to Coron Bay Air Raid History.

Seventy years later, these wrecks have become artificial reefs and are teeming with wildlife. After receiving our diving certifications, it was time for Mark and I to scuba-suit up and see for ourselves. 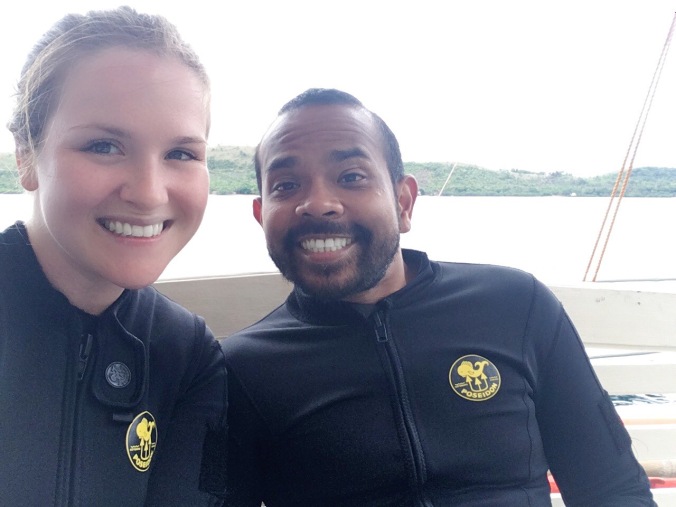 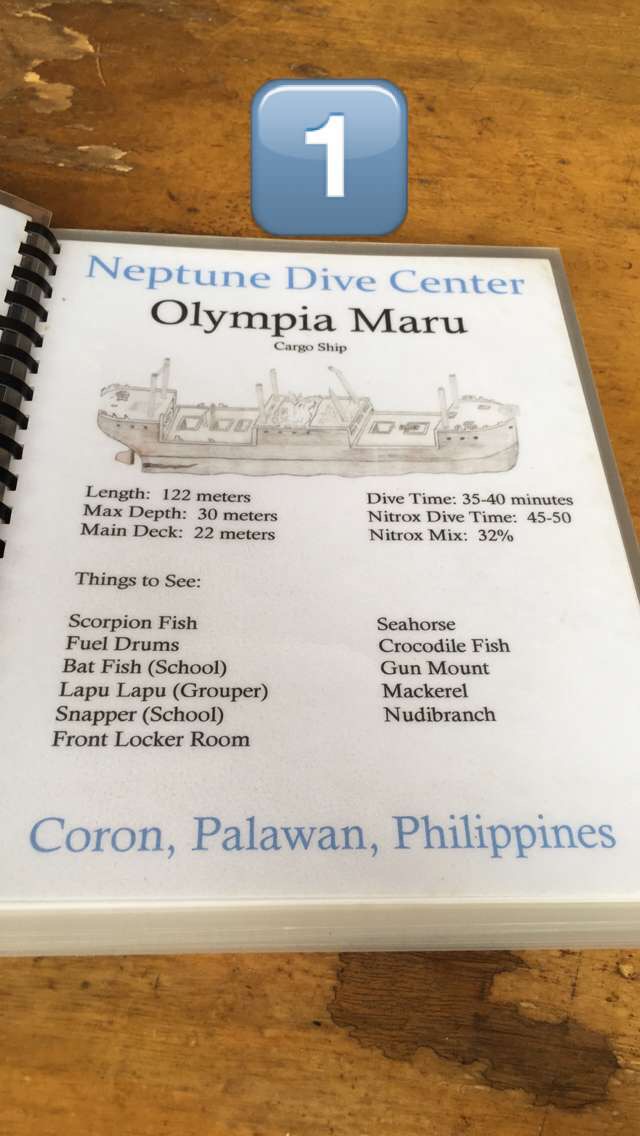 Our first dive was through Olympia Maru. In the photo of the guidebook above, you can see that there are four openings at the top of the ship. From the second one from the right was where we entered, and we made our way through. We had to be very careful of our breathing to be sure not to become more buoyant and hit our heads on the roofs of the ship.

We could see many shipping containers with Japanese writing and cargo drums. It was amazing to see something so human, yet so foreign to the other world that we’ve found under the sea, where tropical fish and corals had claimed it as their own. The ship was so big, it was like a warehouse was just dropped into the ocean.

Not gonna lie, I was totally feeling some Little Mermaid vibes. Unfortunately, we hadn’t yet bought our GoPro, so here’s some low-quality printed photos of the site:

Next up was Morazan Maru. 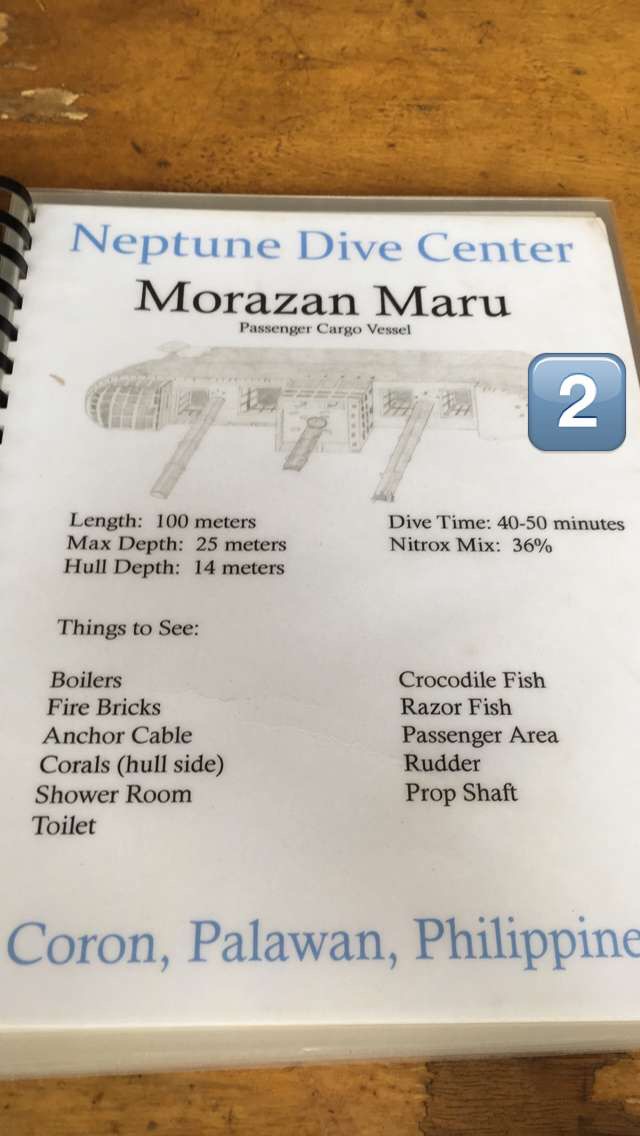 This one had far more traces of human life, as it was a passenger ship. There was even a toilet! Through the years of deterioration, its turned more into a few large chunks of porcelain, but it was still neat. Because Morazan Maru sunk onto its side, it was more challenging  to orient where was up and down and it was more difficult to make our way through the narrow passageways of the ship without disturbing the corals.

What was really cool about this dive was that because of it’s side orientation, there’s a big pocket of air within the walls of the base of the ship. So we were able to take off our regulators and breathe some [not at all] fresh air all the way unda da sea.

Last up was Teru Kaze Maru.

Diving along with us was a guide, as well as a young tourist from the UK. He opted out of this last dive, as he said he had been travelling throughout Australia and South Asia for the last four months and his resources were depleted.

When we got back on the boat, I didn’t want to break it to him that it was my favorite of the dives. This wreck was much closer to the surface, so light was abundant, the colors of sea life and coral were far more vibrant and the corals were less spread apart. It was also a very small ship, so from the outside I was more able to see the shape of the hull more clearly. While Olympia Maru felt like a warehouse and Morazan Maru was disorienting, this one was without a doubt a ship. Hah! Not like I was doubting the others were, ;).

That being said, I think that whichever shipwreck dive is my latest will likely be my favorite. Diving, for me, is not one of those “you’ve seen one and you’ve seen ’em all” kind of things. It’s a more colorful, more thrilling, underwater hiking. It’s always different, full of sights, full of energy, and stunning. 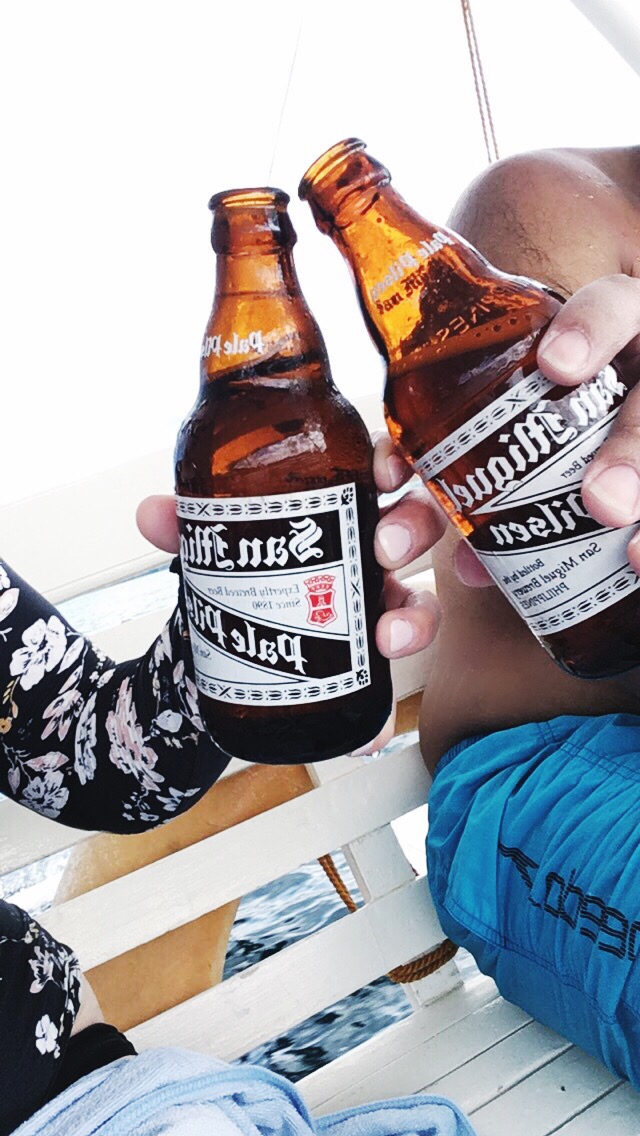 Here, here! I’ve been a busy one lately–to the other side of the world and back, even. I’ve been toying with where to start when I begin writing again, and then finally, I decided: I’m just going to dive right in. END_OF_DOCUMENT_TOKEN_TO_BE_REPLACED

Last year, I read an article in The New York Times about NatGeo’s 2012 adventurer of the year, Alastair Humphreys and The Virtue of Microadventures. At the time, it struck me. It’s a lesson that took me too long to grasp: in pursuit of living a big, adventurous life, you don’t always have to go far from home.

Connecticut is perfect for microadventures. As I mentioned in my post about how settling in to CT, there is an abundance of open space areas to wander through & break away. On a run one day, I stumbled upon Mill Hill Open Space.

END_OF_DOCUMENT_TOKEN_TO_BE_REPLACED

Spring has certainly sprung over in our little corner of Coastal Connecticut! For me, that means spring cleaning every nook and cranny, yard work, and enjoying the heck outta the outdoors. But! I can’t let one more day go by without sharing the final full day we spent in Puerto Rico–it’s been a week and a half since we were there.

The visitor center at El Yunque National Forest was great- all outdoors, but well covered. There were many exhibits on the wildlife, Rainforest preservation, and we caught an English version of the documentary that shared all of this information in a way that our seven year old could bear.

El Yunque is the only forest in the United States National Park system that is a tropical Rainforest. With my obsession with National Parks (Remember, I eloped in one?), it’s suitable that we showed up to el unique El Yunque during the National Park Service Centennial.

END_OF_DOCUMENT_TOKEN_TO_BE_REPLACED

While we were in Puerto Rico, I was sure to knock off a bucket list item:

There are few zip line adventure companies that allow children along for the ride. In the San Juan area of Puerto Rico, we could only find one. Our son is seven and many require a minimum age of ten years old.

Tropical Adventures in Dorado, a short drive from San Juan, has an accessible course that allows anyone from “six years old, to healthy seventy year olds.”

The views of the Rainforest as we were zip lining were absolutely breathtaking. 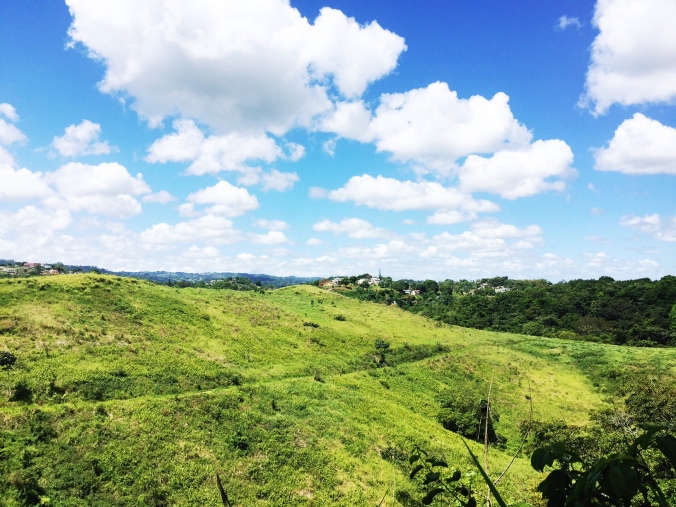 Tobias is afraid of heights, so I was really worried about this excursion before the trip. END_OF_DOCUMENT_TOKEN_TO_BE_REPLACED

Yesterday I talked about the streets of Old San Juan, but what about the EATS? Like I mentioned back when we ate a traditional Japanese meal in Kyoto, I’m no food blogger. I get too embarrassed & hungry to take good food pictures. But, the food was so delicious in San Juan that I had to Snapchat it along the way and share it with y’all here today. Here are 9 things you must try when staying in San Juan, Puerto Rico. END_OF_DOCUMENT_TOKEN_TO_BE_REPLACED

I’m not gonna lie, our reasoning for traveling to Puerto Rico was three fold.

I’m a go-go-go type of traveler. You won’t catch me flying across the country just to read a book by the beach, no no. I like to engross myself in the culture, eat all of the local cuisine, and find at least one adventure.

END_OF_DOCUMENT_TOKEN_TO_BE_REPLACED

Whew! We got back last night from our trip to San Juan, Puerto Rico. Though we were there for a relatively short time, I learned so much and took so many photos that I hardly know where to begin! I’ll start with the oldest & biggest, Castillo San Felipe del Morro. 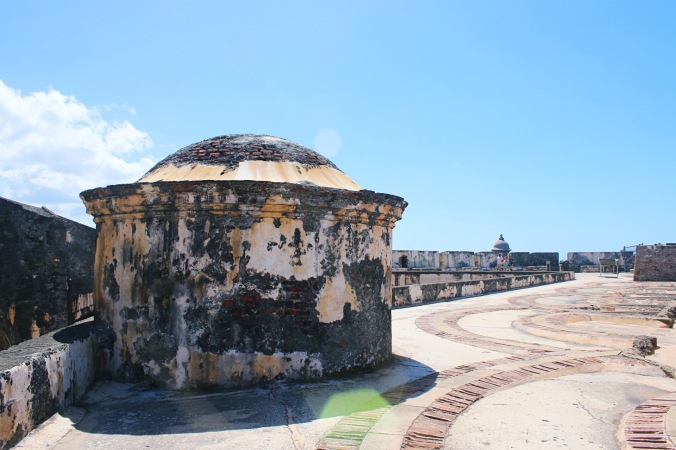