Alright, y’all. We’re two months into 2017, and politics aside, things have been terrific. Regarding my 2017 resolutions, I’ve been kicking…cans and taking names.

Well, except for one. That whole “Hit ‘Publish’ more often/post old drafts I haven’t finished thing–yeah, it hasn’t been happening. Until now!

Over the summer, I went on a life-changing trip to Peru. I wasn’t blogging regularly at the time, and when I got back into the habit, there were many adventures but felt like it was ‘old news.’ PSH. I’m sure someone out in the interwebz will find this as useful when planning a trip online as my most popular travel posts: Arashiyama Bamboo Forest & Monkey Park Iwatayama, Road trip from Denver to Yellowstone National Park, and The Bio-luminescent Palawan River + Island Hopping. Even if it isn’t, why NOT post? It’s my website, I do what I want.

So, let’s do this! Here’s the first of a series of posts about my seven day trip to Peru, where I knocked off my bucket list item of visiting MACHU PICCHU!

First off, let me mention that I did not fly straight into Cusco from New York. Prices for those flights are out of this world! If you’re heading to Cusco, take your International flight to Lima, then use a domestic airline to catch a quick flight to your destination: Cuzco. (Or Cusco. Or Kosko. If we’re speking Quechua here, they call it Qosqo.)

While on my layover, I stocked up on some tools for conquering altitude sickness: Coca candy and lots of water.

I took Latam Airlines, and was immediately introduced to a few South American snacks. 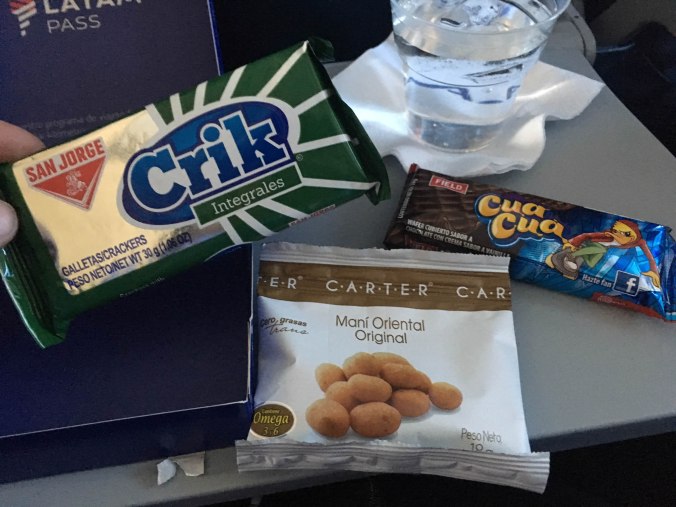 My friend, Ky and I arranged to receive a shuttle straight from the airport to our hotel, Palacio del Inka. The hotel was just gorgeous, and it was the first Starwood Luxury Collection property that I’ve stayed at. My husband and I collect points for Starwood properties, which include W, Westin, Sheraton, St.Regis, etc., and now that they’ve acquired Marriott & Ritz Carlton, they’re the world’s largest hotel chain.

My husband has a hard time without his creature comforts, so it’s pretty crucial to him that we receive some consistency around the world. Staying at these hotels consistently and using our Starwood American Express card to collect points is pretty awesome because this hotel during my girls’ trip was basically FREE.

In fact, we got a 100% free 5th night. Pretty cool when you’re staying at a hotel that was once a part of the Temple of the Sun and later turned into a grand Spanish mansion, if I do say so myself.

It was well into the night, so the lighting wasn’t right for pictures. I snapped this quick one of our room before we threw all our girl stuff all over the place. 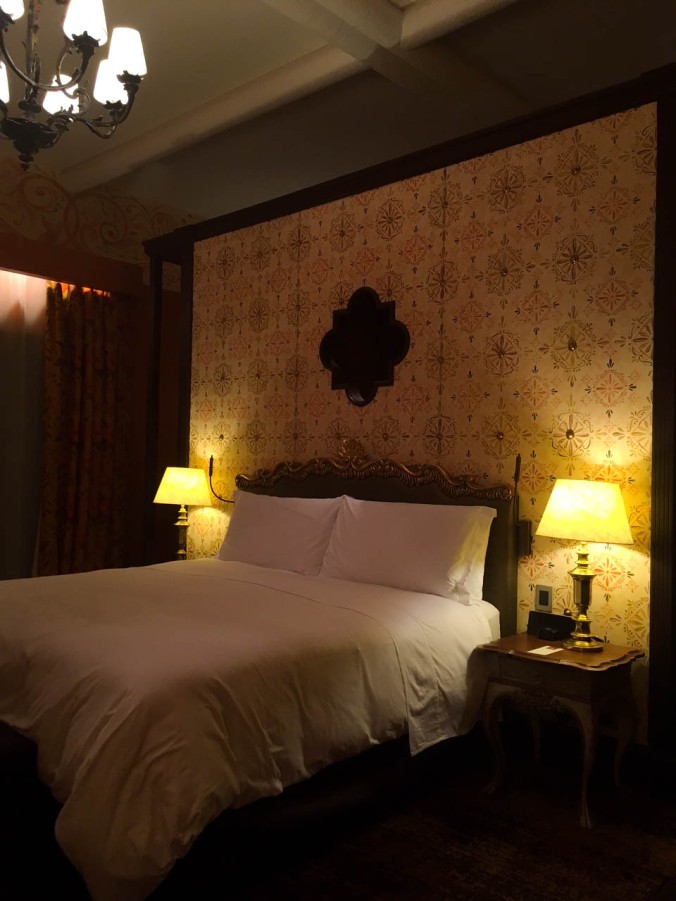 We were hungry and excited to give some international cuisine a go. Because of Palacio del Inka’s convenient location in the Historic District of Cusco, we were able to go for a brief (and safe) walk and find a place that had what we were looking for: Cuy (roasted guinea pig) and alpaca meat.

Alpaca is my favorite animal on the planet so I’m a terrible person.

I can’t believe I ate an alpaca, I felt like I was eating someone’s dog. But I did it and I’ll never do it again!

The guinea pig, however. That’s good stuff. And so were those complimentary Pisco Sours. 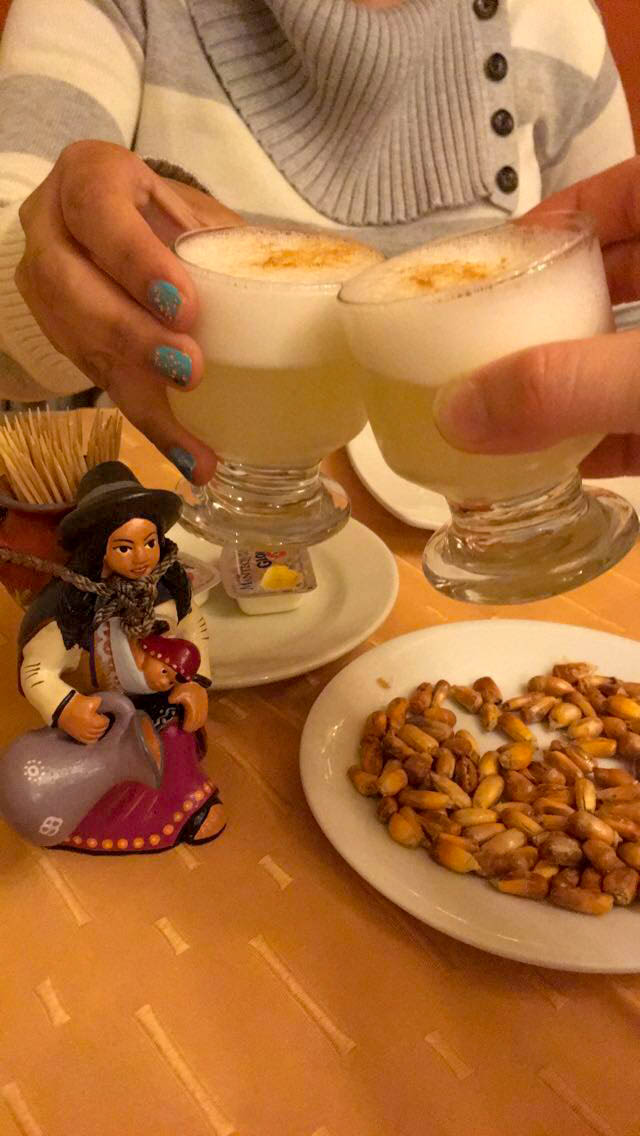 I was a bad blogger and didn’t record what the place was called, but upon some retracing of my steps on GoogleMaps, I’ve uncovered that it was called Don Carlos. 10/10, would eat again.

With our long day of travel and acclimation to the new altitude, Ky and I were pretty wrecked. We headed to our hotel and were pleased to see the turn down service had occurred, including a white chocolate hollow ball full of other chocolatey sweets (Peru is known for their chocolate) and a then-unknown fruit, which I’ve uncovered to be a Peruvian Cherry. It was DELICIOUS, as I found all produce to be in the country.

I got a few good shots of our hotel…

View from our room’s balcony

Door to our room

Peruvian textile maker selling her fabrics in the hotel

then we gulped down as much coca tea as we could (preventative measures against altitude sickness!) and sought out some street food to start our morning.

We stumbled upon a fresh Churro and a spicy pepper with fried dough around it, filled with meat and spices. I thought it’d be too spicy to start the morning off, but it wasn’t  at all. We also stopped in La Valeriana for more Coca Tea, a shared empanada, and discussing our plans for the day. 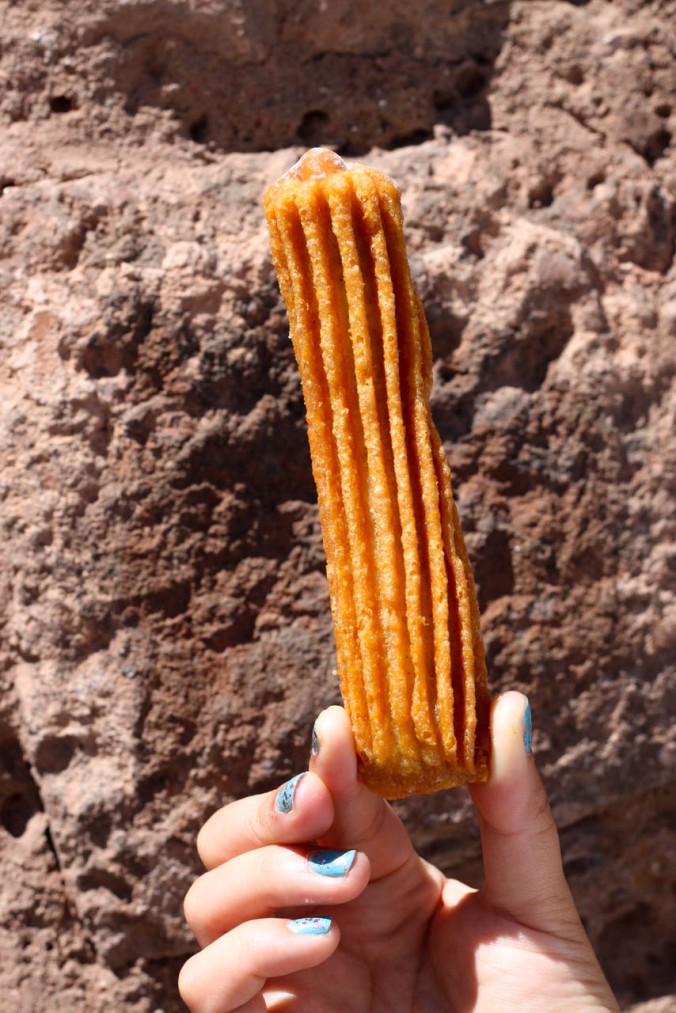 Once we were fueled up, and I had used the bathroom roughly 3847613 times because of all of the hydrating I was doing to ward off altitude sickness, we started touring around the city.

The First stop was this market with Alpacas visiting, there was also someone dressed in traditional Inca garb playing the pan flute. I’ve been retracing our steps on Google maps, and can’t find the name of it, So I’ll have to edit later when I find out. But my friend, Ky, was leading us through the Cusco Itinerary via the most recent edition of Lonely Planet: Peru.

Despite my love (obsession?) for alpaca, I was hopped up on excitementofbeinginadifferentcountry and coca tea & thought these little babies were baby alpaca. DUMB me! They turned out to be newborn lambs. Whatever, still cute. Also:dresses on FLEEK.

This is Cusco’s main square, and is bustling with people, energy, excitement, and tourists from around the globe. One of the most notable sites along the edges of the square is the Cusco Cathedral. 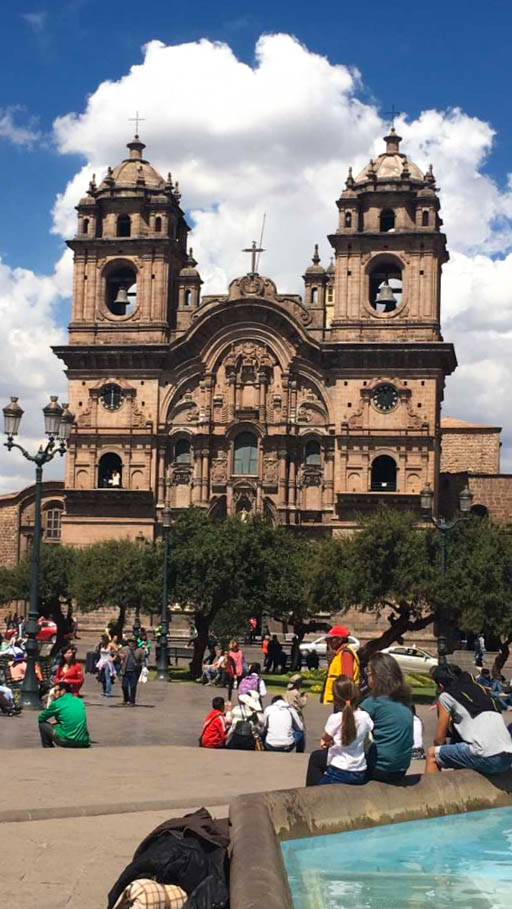 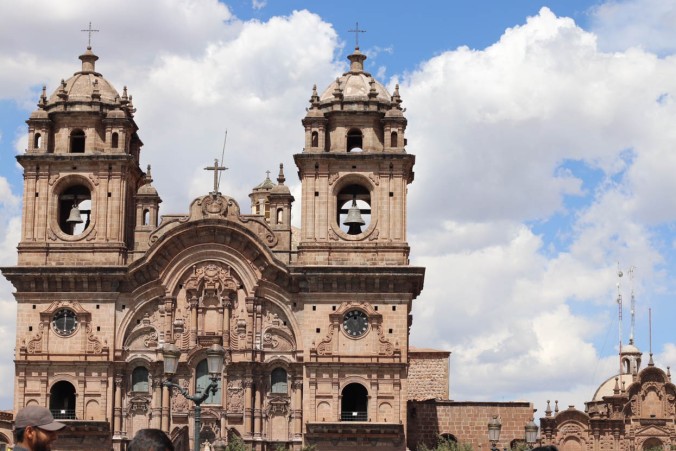 In the center of the square is a fountain of Pachacuti, an Emperor of the Inca Empire. It has been rumored that Machu Picchu was built as a hiliday estate for Pachucuti.

Below him on the fountain are many replicas of me, attempting to stay hydrated enough to ward off the headaches that I was already getting due to the increase in altitude. 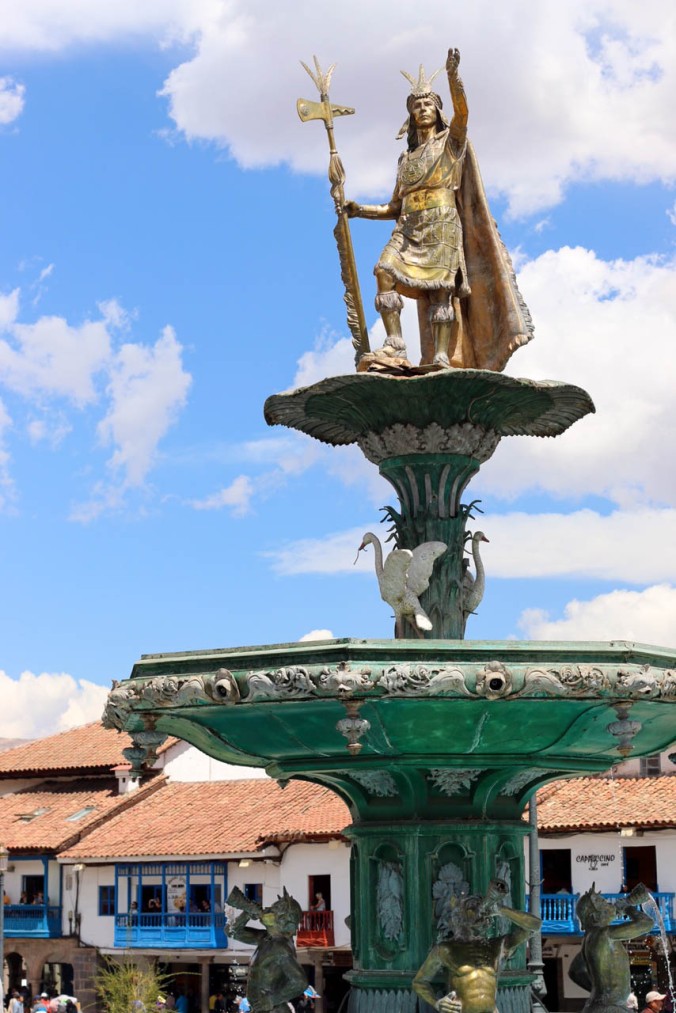 We continued following the advice of Lonely Planet’s Peru guidebook, and went to the Plaza San Blas, where we grabbed more coca tea. Did I mention how much my head hurt?

Then we followed the guidebook’s recommended route toward Sacsaywaman, which is pronounced an awful lot like ‘sexy woman’, but we did not find that there. The road up, was taxing and oxygen deprived. 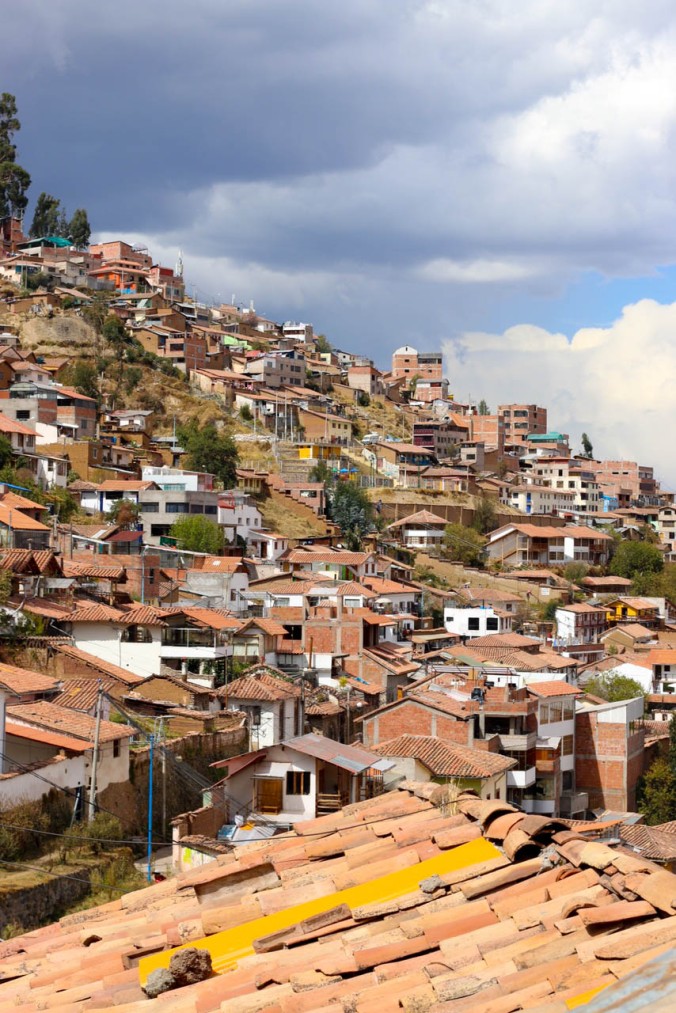 Which is why, right after I took this picture, I made a choice that was likely not in my best interest.

We stumbled upon a man with a map, asking us if we knew how to get to Sacsaywaman. After we told him, he started telling us that he knew how to see Sacsaywaman on horseback, and he could take us there. We walked up more stairs (we had already done plenty) and when we got to the top, there was a car. He opened the door to the car and I immediately jumped back. I literally said, “Actually, nevermind.”

Ky reassured me that it was fine, and it was. We were driven only to the top of the hill, about a 2-3 minute drive. When we arrived, he showed us to the farm where the horses were. As we walked up I was thinking, “ohjeezeweabouttogetTAKEN. Sold into the sex international sex trade. Taking rides from randos, that’s how I’m gonna go down.”

Maybe too much tea from the same leaves that are made from cocaine? 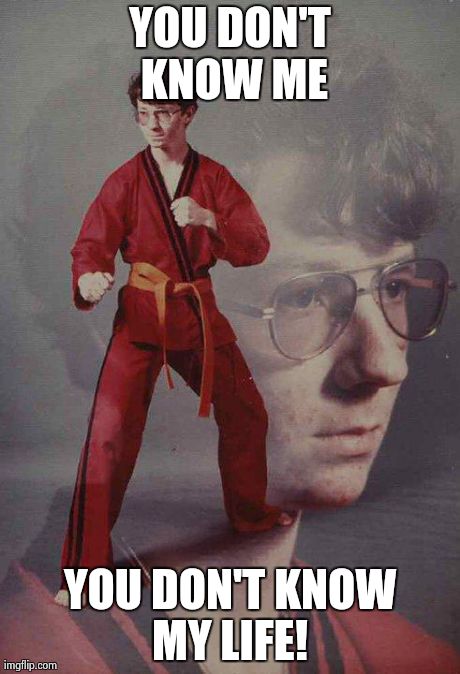 We meet up with another girl, an exchange student from France, who speaks Spanish more fluently than English. I took French in high school and advanced Spanish in university, so basically I’m at smile & nod level for both languages. (But boy, can I impress you with my reading comprehension in both!)

The tour on horseback was stunning, and a nice moment to take it easy and let my headache subside,  and I soon relaxed into the fact that no one wanted to buy me as any kind of slave. 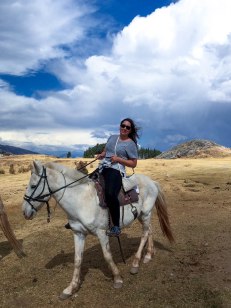 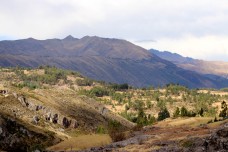 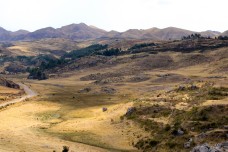 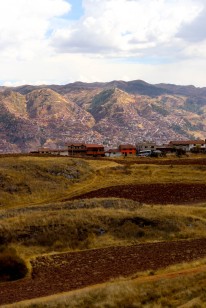 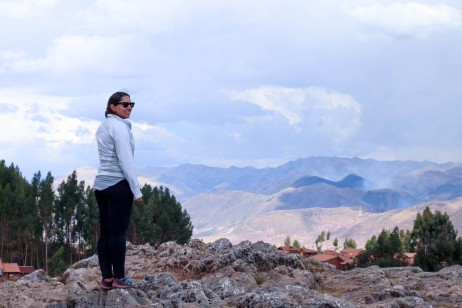 When the ride was coming to a close, Ky noticed we passed up Sacsaywaman and didn’t go in, and started getting upset. Ky doesn’t know a word of Spanish, nor did our guide know much English, and he wasn’t the guy that we paid. She felt ripped off, but I had such a good time that I wasn’t really upset about it. After all, we were free, not walking for a while, and caught some amazing views.

Sacsaywaman was only a minute’s walk from the farm.

After that, we realized our time was limited before we met our scheduled ride to Planetarium Cusco.

If you’re travelling to Machu Picchu and you spend some time in Cusco, I highly recommend that you visit Planetarium Cusco. I found it fascinating how intelligent the people of the Inca culture were. They were able to predict the weather, had a calendar system in which architectural structures in which the sun would line up exactly on certain days of the year, and were skilled builders.

I’m so fascinated by the Inca culture and all that they left behind. After the trip, I ended up getting a book about the mysteries of Machu Picchu and I wish I had the chance to read it before.

I digress. Planetarium Cusco consisted of three parts, and it was seperated in two groups: Spanish speakers and English speakers. We had many Swedes in our group and only a couple of other Americans. The first section was describing the importance of the stars to the Incas, and how they used this knowledge for seemingly very scientific farming. The second part was when we looked outside through a few high-powered telescopes. Unfortunately, it was cloudy that night, but we were still able to see Saturn. Here’s a photo snapped by Ky:

The third part was the planetarium, where the stars are above head and the guide tells you about the traditional constellations that Western sailors used as well as the formations that the South American farmers saw and their names. I found it very interesting how worlds away, people were both inclined to see images by connecting the dots of the stars.

It also may seem quite elementary, but it never had occurred to me before that those in the Northern Hemisphere would see different stars than the Southern.

There you have it, that’s the day we spent in Cusco. On our last day in the area, we were able to see Qorikancha before our flight, which is definitely the top site in Cusco. I’ll go more into detail about that at a later time, but if you’re currently planning a trip to Peru, I recommend spending at minimum two full days in Cusco to see all that it has to offer without suffering too much altitude sickness.

6 thoughts on “A Day in Cusco Itinerary, Coca Tea + Rides with Strangers”