It’s been three months since my last post. I’ve traveled to the other side of the world, knocked several things off of my bucket list, and have done countless DIY projects. However, those were all fleeting moments. Before I start spitting out informational posts about things to do and make, I want to talk a little about something I carry with me on all of my trips. This is something I hold onto despite my endeavors, and the same thing that stops me from sharing online: crippling anxiety.

I thought, for a time, that my anxiety began when I moved to Connecticut. And, if that was the case, it would pass once I made some new friends. I didn’t know where I fit in, so maybe if I found my place, these feelings would subside. I’ve realized that isn’t so and if I don’t take action, I’m going to be stuck in this rut.

A lot of times I don’t understand what’s going on in my head until I write it. I utilize my daily morning pages (per The Artist’s Way, recommended to all!) to sort out most of these things in a free-form way. This anxiety I’ve been feeling, however, has been a bigger problem. Maybe, in my sorting out and sharing, I can work on it and maybe you can relate. Who knows. After all, I did decide I wanted to be more raw in this blog.

From my perspective, it’s a feeling of shame that spirals out of control. It can start with something simple:

I was telling my mom about my anxiety on my recent trip to Texas, and I kept relaying these different stories about the grocery store. She laughed once she realized the common thread. But, as someone who works from home, this is really the only busy place I have to go to.

I feel like I’m pretty confident in my abilities in certain tasks. I’m a decent writer, awesome wife, doing-my-damned-best at being a mom, and am hella-resourceful. But, for some reason, when it comes to the more simple things, I feel like I just don’t know how to practice regular, everyday life.

Each minuscule social interaction, afterward, becomes huge deal. I’m not one to filter what I say, and “always honest” is something I can say of myself with confidence. It’s afterward that’s the trouble.

Was I too blunt?

Could they have taken that the wrong way?

What will they think of me?

Most of the time I just feel completely unprepared for life. Like I was never taught how to do things the ‘right,’ ‘proper’ or ‘appropriate’ way. Like I’m just stumbling around, making an ass of myself and everyone is just too polite to mention it to my face.

Is it a lack of a steady foundation…

I often credit this under-prepared-ness to my lack of discipline or opportunity to be properly socialized growing up. In childhood I spent much of my time alone or in hospitals. By the time I was twelve years old, I heavily depended on a drug culture to meet people and socialize.

Drugs were my social crutch during my teenage years. This muscle may have atrophied, because I do believe that as an adult, I’m socially handicapped. I find myself unsure how to relate to people or establish relationships.

…or is it ingrained feelings of worthlessness?

I was physically and emotionally abused for years by a boy I chose to be in a relationship with in high school. I then chose to be in a relationship, conceive a child with, marry, and have a child with another man who shared these same behaviors. I recognize the role I played in these situations, but I also know that I didn’t get out unscathed. There are words, violence, and a sense of fear that still haunts me in my dreams.

I chose to be in relationships with these people, but I did not choose the underlying lack of self-love that I must have felt to allow these people in my life. That was ingrained, day-by-day, by the father that abandoned me as a young child while I was going through chemotherapy.

As a an adult who is fully responsible for their own life, it’s hard placing blame on my parents for anything. But, the fact remains: parenting is fucking important. And it’s important to know the source of pain in order to move through it.

I need to pay attention to the kind of things that trigger my anxiety. Not necessarily to avoid them. In certain situations, I feel, it is important to sit in the discomfort, allow it to blister and then callous. I spent a lot of time hiding who I was (my high school blog was aptly named, “sugar coated and plastic wrapped”) and now that I’m living more true to myself, I want more than a hardened shell. I want to be brave.

It’s not really about the grocery store, despite the commonality within the thread. Moving to this part of the country, where wealth and whiteness are aplenty, I feel so foreign. I once felt like my hardships made me wiser, stronger, and gave me plenty of book material. But it also makes me feel alienated in suburbia.

In Houston, I had my lifetime friends. Those who shared some of my hard knocks. They knew my experience and I didn’t feel ashamed. I felt proud to have weathered my storms.

Houston is such a melting pot that I was really blind to the stark differences in class in our society. I never thought about new vs. old money before. Here, it’s in my face. I live comfortably financially but my anxiety makes me hyper aware of the differences in background between me and most of these people.

I know, I’ve already mentioned my weird relationship with social media. I think it plays a big role in my anxiety. I recently finished First, We Make the Beast Beautiful by Sarah Wilson. The book speaks on how our human brains just simply aren’t cut out for the speed in which we are putting them through. The constant flow of information, the overabundance of opportunities to be “social” while still remaining on our couch. Or on the train. At your desk. Anywhere. It’s just too much to keep up with.

When I post something, I still am carrying that same shame that I felt earlier on in the day while I was on my errands. I just don’t want to feel like I’m doing anything to seek out validation, but when I check my likes, that’s exactly what I’m doing. I have to post and then delete the app. I just can’t control myself.

For some reason, I’ve internalized internet posting as asking the question, “Am I good enough?” and use likes as an indicator. It’s exhausting, it’s fucked up, and it’s shameful. But maybe, just maybe, the more I speak about the things I am ashamed of, the more I’ll own them. Maybe then I will have the strength to take them, claim them as mine and nurse them until I am proud of my scars and baggage again?

Oh, flaking. I hesitate to write on this subject, worried that someone will take it personally. But you know, whatever. My anxiety makes flaking more difficult to handle. At several different points in Wilson’s, book, she discusses how lateness and flakiness are a trigger for her, as well. 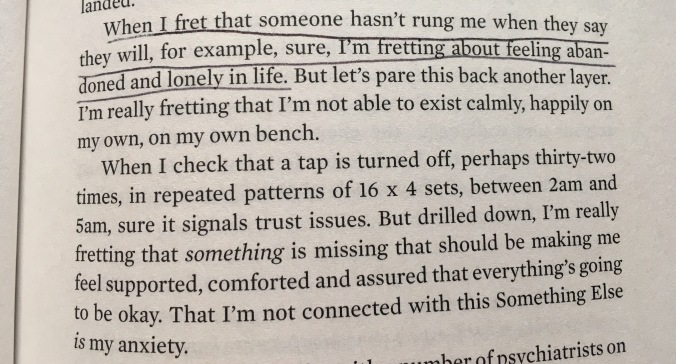 For me, maybe it’s that when someone doesn’t show up, I just revert to an abandoned kid again. This person didn’t show up because they don’t care enough. I’m not enough.

This is a difficult thing to deal with, considering that The Times recently declared that we’re now in The Golden Age of Bailing. I don’t have this problem nearly as much with my non-millenial friends, but with my age, wow. Do you realize that in twenty-four hours or less, TWENTY SIX RSVP’d guests + family members last minute cancelled or didn’t show up at all to a get-together I recently threw in Houston? It was like everything I had been anxious about for two weeks prior came true: too much leftover cake, booze, and tacos. Never again, lesson learned.

…and Then There’s More Shame

It feels shameful to be scared. It’s shameful that what seemingly is my biggest problem is that I’m not as rich as my neighbors or that half of the people didn’t show up for my birthday. I hope that’s not how you interpreted this (there I go again) because wealth, materials, and popularity aren’t my priority. Learning, family, close interpersonal connection and art are my highest values.

It’s taken me three weeks to finish writing and be ready to hit send on this post. A part of me has felt too embarrassed to share these feelings.  There’s a stigma that comes with anxiety and depression, which are just two different sides to the same coin: either your’e feeling inconsolable over what has happened in the past (depression) or you’re consistently fearful of the future (anxiety). Either way, you’re not in the moment.

I’m just working on getting in the moment. I’d like to share some of the ways I’m working on my anxiety, and some of the things I’ve been reading. But, not next post. Next post I want to talk about something light. Like our family trip to Australia.

5 thoughts on “On Anxiety”