Prior to yesterday, the last time I wrote was when I had only a few days left before we moved into our new house. I shared with you a home tour of our first Connecticut house, though it was staged in those photographs for selling. As promised, here are some pictures of what our communal space looked like as we lived in it.

Upon entering our previous home, there was a mud room just big enough for a small closet. On the other side of that door, you were first greeted by these stairs.

I wallpapered the stair risers with this gorgeous metallic wallpaper from Jonathan Adler. The paper was a real splurge, but I still have enough to do a decent size project again and it was, in my opinion, the biggest “wow” feature I could have in a small space.

They’ve since discontinued this wallpaper from Jonathan Adler, as well as most of the others that were produced by his brand.

On the wall going up the stairs was my collection of photographs from our travels and some of the more exciting experiences we’ve had that were on or off the bucket list. I called this wall my “gallery of adventures.” With it being up the stairs, it was very hard to shoot, but here’s a glance.

Almost all of the frames were thrifted, and if they weren’t already a shade of bronze or gold, I sprayed them with Rustoleum Metallic.

The pink French door led to the mudroom. I painted it myself. It was white, along with everything else, when we moved in. Check out New House Project Plans to see the beginnings of this space. It was a real blank canvas.

Those footstools were from Homegoods. I thought they were totally unnecessary when I bought them, but I couldn’t resist the fact that they were the perfect colors to go with the rug.

I ended up putting them near the entrance so that we could sit and remove our winter boots somewhere other than the stairs. We did this, but far more frequently we’d move them over to the coffee table as additional seating for board and card games. 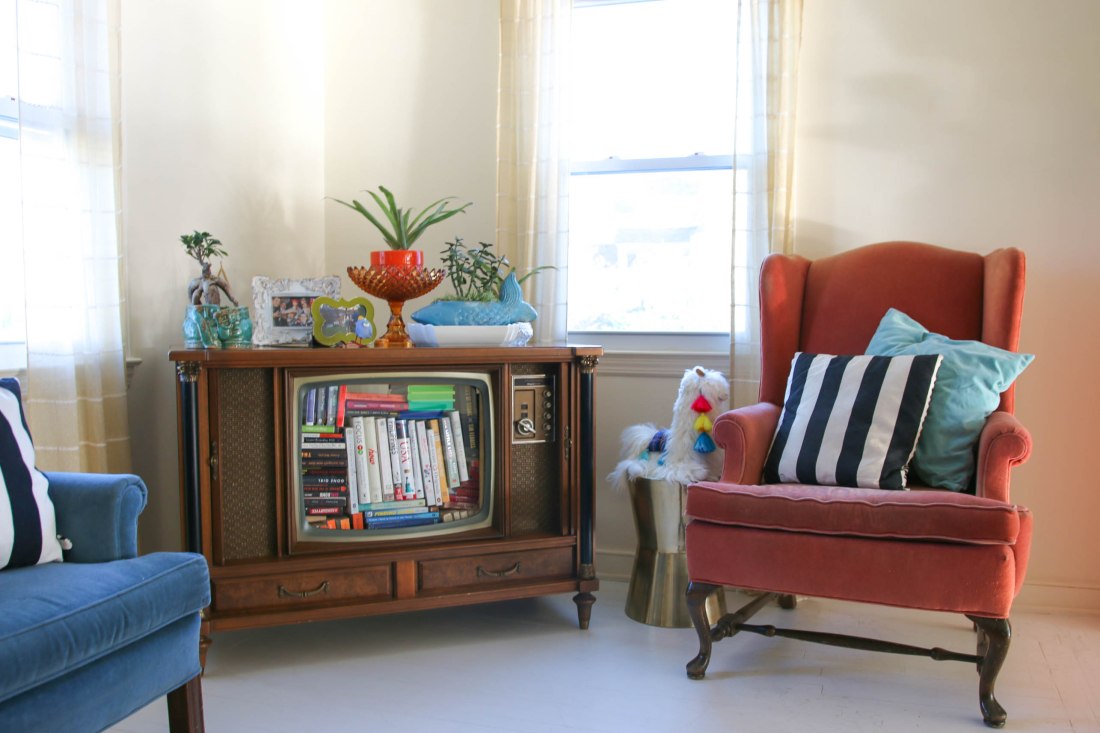 Both of the wingback chairs were thrifted for $25 each, but a few years apart. One day I’ll at least reupholster that mauve-y one. The black and white striped pillows were a couple of my first sewing machine projects. The fabric is from Ikea.

When we moved in to this home, one of the first things I did was remove the bamboo blinds and add sheer curtains. It allowed for just enough privacy but made for a lot of natural light that ultimately helped the small space feel larger.

Here’s a wider shot of the living room. In it you can see the weaving that I created with a hula hoop. Going through these pictures is making me so nostalgic! 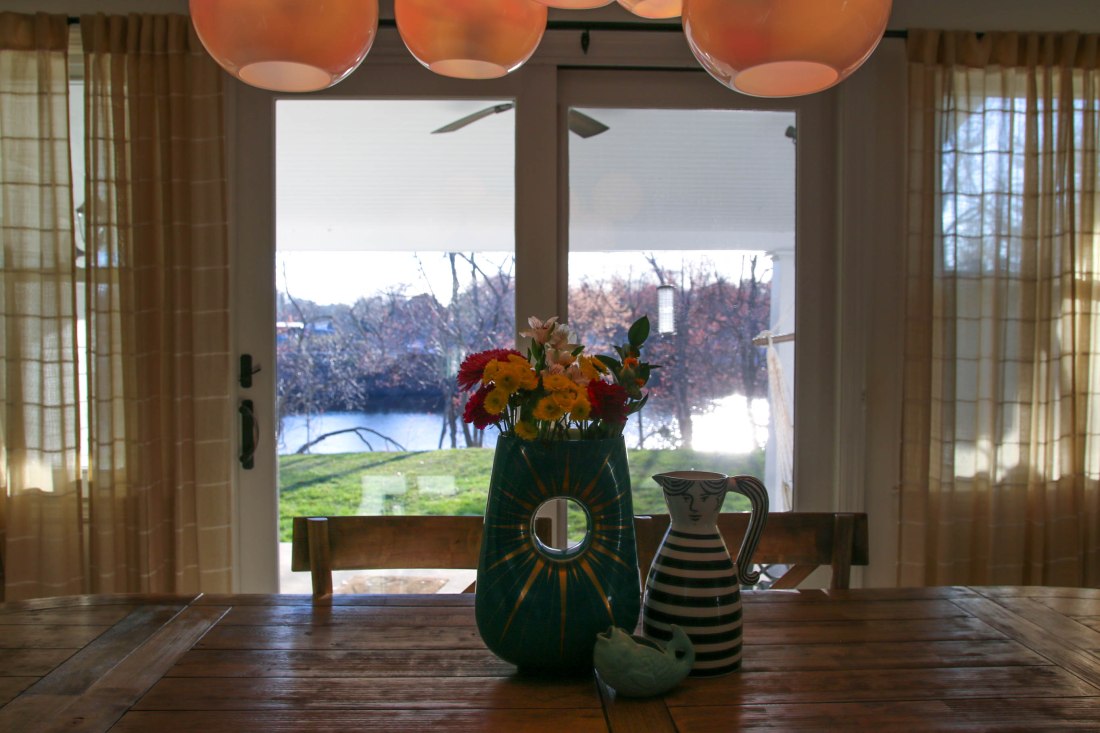 For every meal (or any other activity), I sat on the right, facing the water. I really loved the view of the pond and that we could see it from so many angles of the little house. 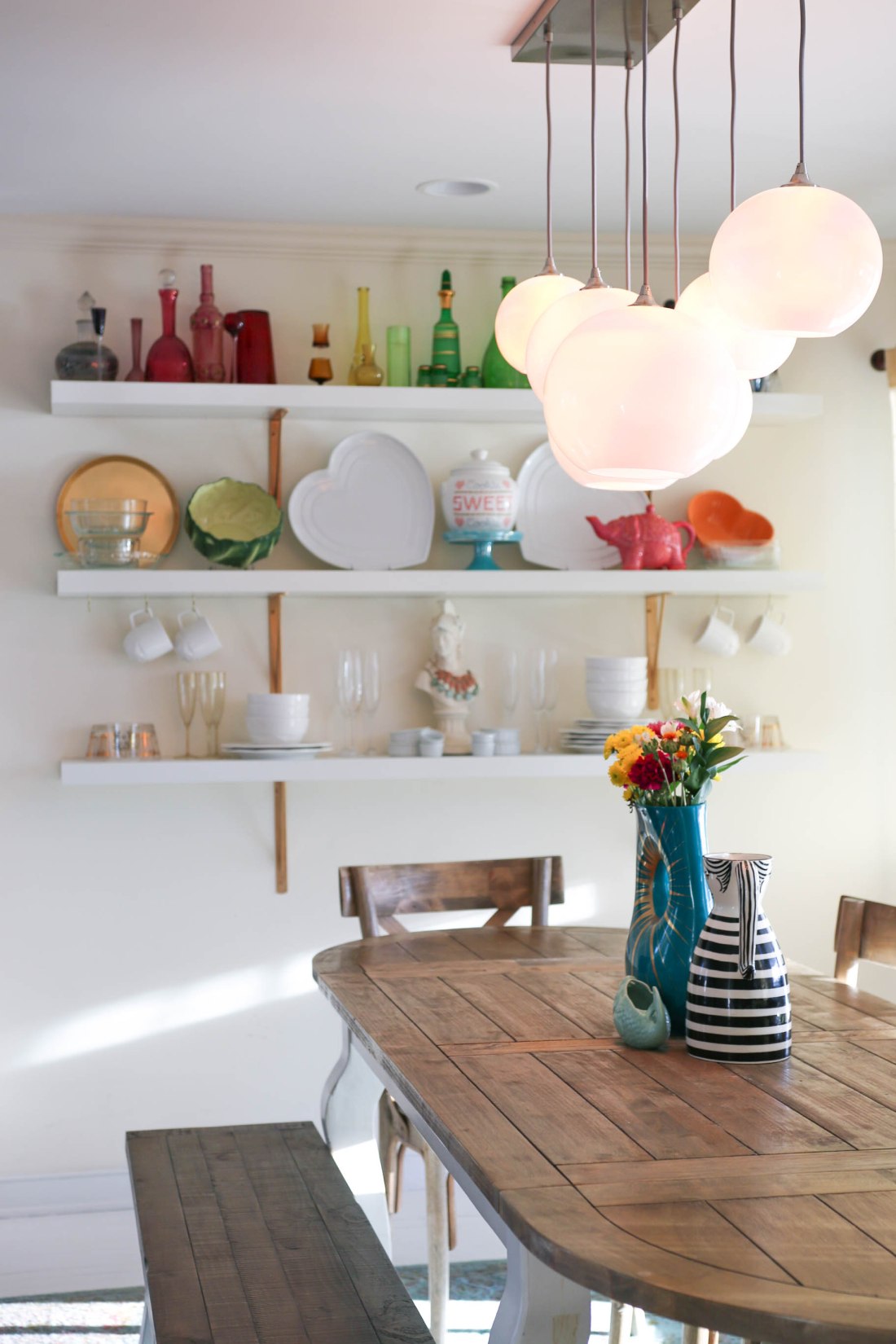 We added these shelves out of necessity–there wasn’t much cabinet space in that kitchen at all! They were simple shelves from IKEA with traditional white brackets from the hardware store for support, painted gold.

There originally wasn’t a light fixture above the dining table at all, so when I had this one from West Elm installed with stained glass lightbulbs, it made a big impact.

And in the center of it all was our not-once-used fireplace and the definitely used TV that came with the house. We hadn’t had a TV for a few years prior and we left it when we sold…but I admit, we bought another TV 🙃

And that’s all she wrote! This space, and the projects that I created within it seem like ancient history now, but there may be times I want to reference it or I may decide to finally share half-written step-by-step tutorials for some of these projects.